Austin Triathlon Club 2022 Board of Directors 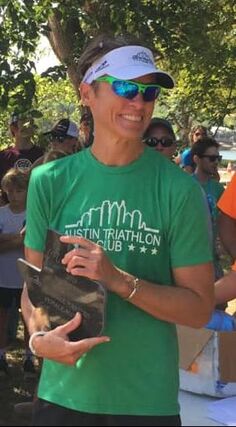 Andrea has been a life-long athlete, participating in dozens of sports. However, at a young age it was apparent that she was a "fish" in the water, qualifying for USS Nationals at the age of 12 and ultimately posting two high school national swim records at age 17.  She was fortunate enough to finish out her remaining swimming career at the University of Texas, where she was a NCAA Div 1 National Champion, multiple All American and member of the US National Swim Team.
After graduating from the UT, Andrea went on to work for Speedo America where she discovered the incredible sport of triathlon. She was hooked and by her second summer in the sport qualified for the Ironman World Championship, where she finished 11th overall as an amateur athlete. At age 24 Andrea made the decision to pursue the new passion, packed up her bags, put her personal training business on hold to turn professional.

Andrea’s longevity within the sport of triathlon is rare, but her accolades during her professional career are abundant. She holds multiple Ironman swim course records, a record number of top 5 finishes, posted the year's fastest half-ironman time at the Eagleman Half IM (IM Kona qualifier), and dominated the USAT Southwest Regional multi-sport races for years. Andrea raced professionally for close to 16 years, which speaks volumes with regard to her physical and mental fortitude.

Andrea now works full time as the Operations Director for Austin Runners Club, is a mom to four wonderful young girls, volunteers within her community and continues to race as an age group athlete at an international level. She is still managing to win at various events, including ultra-runs, road cycling, road running and currently holds a world record for the masters women's beer mile.  This year, as a 50 year old age group mom, she'll be racing at the Boston Marathon April 2022 for the first time....and the IM World Championship, Kona Hawaii in October 2022 for the last time.  Her farewell IM race in Kona will be her 41st IM event and her 26th anniversary since her first time racing Kona.

In her spare time, Andrea enjoys camping, hiking, landscaping, cooking, movies, random road trips and of course spending as much time as she can with her awesome daughters and husband Mark. ​
Christopher Stewart Mickler, Vice President   vp@austintriclub.org 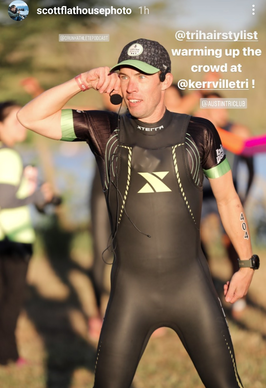 Ever since Memorial Day In 2012, when I happened across the Captex tri with the Para-triathlete National Championships, I was hooked on the sport of triathlon. To think that I told myself that I couldn't swim, and there were people with their various disabilities racing: I had no reason left, just the will to try.
Since watching those athletes, I have quit a 20 year smoking habit and competed in many triathlon distances a year. I have run many half-marathons, marathons including NYC, and qualified and got into Boston ( though was unable to race due to Covid), several Ironman 70.3s, and 5 Ironman races as of 2021. And for 2022 I have Chatty 70.3, 70.3 world's and IM Alaska.
Since 2012, I have found myself part of various triathlon groups all with great benefits, all of which I have learned so much from, and have made so many great friends that are like-minded.
Being a part of a bigger community, and enjoying the company of the community, I am getting excited to help our community grow. Here's to 2022. 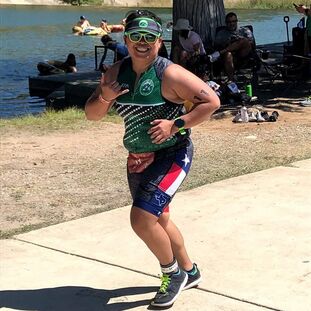 Joy started triathlon in 2018. Because of it, she quit smoking cold turkey, turned to social drinking and met an amazing support group with the triathlon community. Her first race was the Rookie Triathlon and after crossing the finish line she was just wanting more. After the past 3 years of racing (more participating really, and we kinda skipped 2020) she was able to complete a number of short course races all over the Austin area and a couple of half iron distance races in Kerrville, some trail races and a LiveStrong ride. If not on course racing, you can find her at the sidelines, cheering, or volunteering, because for her, these are the best ways to give back to the tri community. Currently, she is training for her first full Ironman in Florida in November! Matthew was never particularly active, but finally got the motivation to commute by bike in 2014.  That year he had a lot of fun, and beyond biking to work got involved in charity rides and ran his first 5K.  With some friends who had gotten into triathlon a few years prior, he started swimming in the winter of 2014, and did The Rookie Tri as his first multisport race in 2015. Beginning that year he has competed in 5-6 triathlons a year, mostly sprints, and a total of 6 Ironman 70.3 events.

His first interest in endurance sports is just maintaining a healthy lifestyle, but the community around events and the ability to support other people on their journeys has kept him coming back.
Jeff Campbell, Member at Large  jeff@austintriclub.org

2020 ended with Jeff quitting smoking, quitting drinking, a broken ankle, and a nasty case of Crohn’s disease. Fortunately, surgery and recovery led Jeff to triathlon in 2021.  Jeff Tri’d first as an ultimate goal, then as a pass-time enjoying the activity, and now as age grouper triathlete who loves the daily grind.  Jeff had little adult athletic experience, with only long-ago swimming and high school football experience, and no running or cycling experience at all. After the Waco Sprint and Kerrville Olympic, he’s solidly hooked on swimming, biking, and yes, even running.  To his surprise, Jeff participates in the Monday night “fun” runs and really enjoys the Saturday long run.  He is keeping it short distance in 2022 to learn the sport and develop his speed and stamina; looking forward to 10+ events including a half marathon, his first Xterra, and several Triathlons. 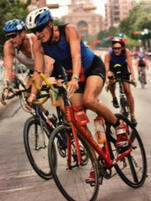 Totally “on a lark” Craig did his first triathlon, the third in Texas, in 1981. That led to learning how to really swim, run and bike. That led to qualifying for a national championship in 1986 and a world championship in 1993. Thirty-eight years in the sport involved travels all over the world, meeting wonderful people, helping to put on races, and doing a bit of coaching.